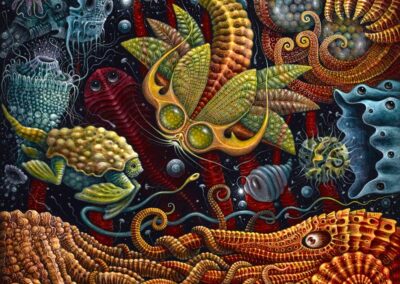 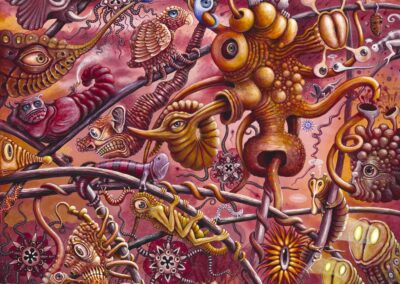 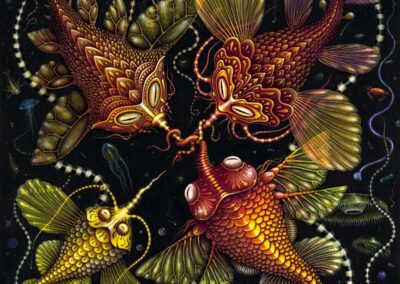 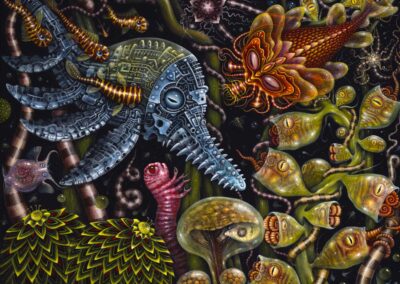 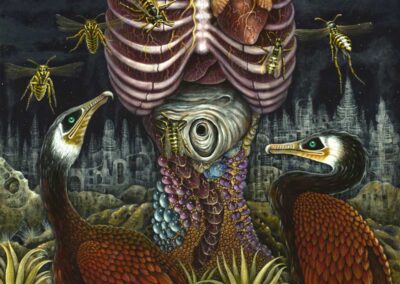 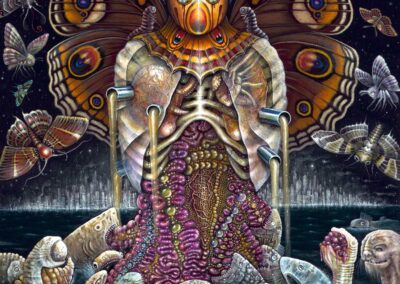 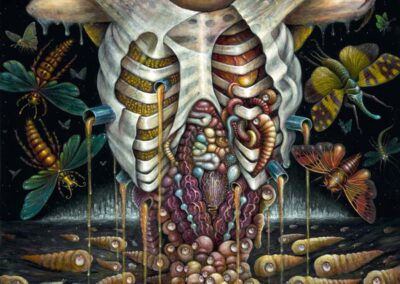 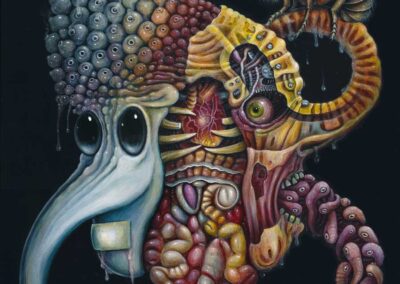 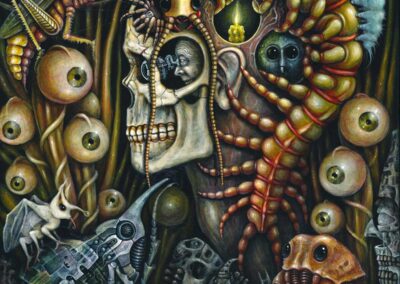 This is a painting I specifically made for the upcoming “DREAMS” issue of BLABWORLD magazine.. 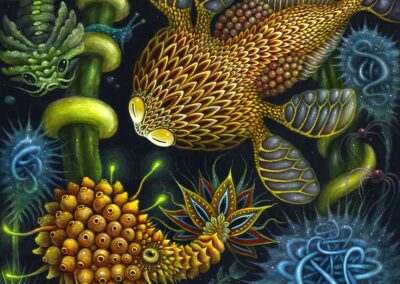 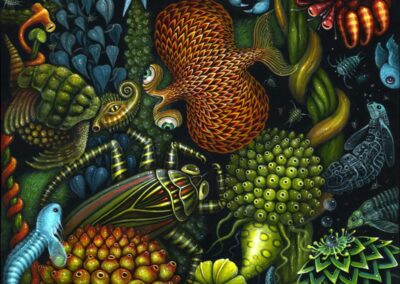 Prints of this painting Available HERE

I was very happy to accept this commission because this painting has a lot of personal meaning for me.

STORY: I want to walk into this picture and disappear. I wish to leave the absurd trials and tribulations of men behind, and become part of my painted world. A more interesting and mysterious world where fish rise up above the water to stare at men. Where fish can fly like birds, and translucent creatures swim across the starry night sky shimmering in moon light.

Many years ago, when I was a young boy, my father would wake me before dawn to go fishing in the Ocean. We would drive through the foggy San Francisco streets to “Muni Pier” , buy bait wrapped in yesterdays newspaper, and drive across the Golden Gate Bridge to Sausalito. There my father had moored an old 26 foot inboard with a cabin. To my young eyes a Ship! As the first false dawn light began to color the world, we would board with our gear. Trembling with the morning chill, breathing out hot steam into the cold, he’d start the engine. The smell of gasoline, bait and salt water is a heavenly memory.

We made slowly out the jetty and into the San Francisco Bay to cross the “Potato Patch”. This is an area of rough water under the Golden Gate bridge where many a small boat has gone down in a sudden storm. Past this fearful patch of rough water lay the beautiful blue waters off Marin County, California. We would skirt the shore, find a still cove and drop anchor. These coves were always surrounded by high cliffs with wild trees overhanging the edges. The Cliffs were natural wind breaks. The water was blue black with its depth, and still as a mirror. The smell there was pine forest mixed with salt water, morning sun, exhaust fumes and dead fish. When I die, if I smell this, I will know there is a heaven after all.

My excitement to begin was so extreme that my fingers would tremble while I set my hooks and sinkers. My father and I would sit side by side in lawn chairs as the boat gently swayed in the calm morning water. The fog would clear in spots and open holes in the sky. Through these openings rays of white orange sunlight would appear. Someone called these “The Fingers of God”.

And what fish we caught! I never knew what monstrous beauty I might pull from those waters! Creatures from science fiction! Things that I was sure no one had ever seen before! Huge green purple kelp fish with bulging eyes and fins that looked more like seaweed than fish fins, mottled with countless of hues of blues, greens and violets and blacks. They were covered with tiny slithering worms and tiny jittering crustacean fleas. Amazing things that I would stare at with the wide eyed wonder of a seven year old boy.

There were Leopard Sharks with beautiful black spots. Fish that looked like futuristic cylindrical space ships, Crabs, giant jellyfish, White sharks as big as our boat! (Very scary!) and so many more! The sea’s imagination knows no bounds!

The fish my father wanted were the Salmon and Stripped Bass. He once caught a 50 pound Salmon off the Gate! There were big Bat Rays that might take 3 hours for my father to land. He would never know what they were until it surfaced. He always thought he might have a huge salmon, and would curse in rage when it was only a “F-ING RAY” that he had sweated hours to bring to the surface!

My favorite times were slow and silent. When our lines made the only ripple upon the water. The only sound was the soft lapping of the dark water against our boat, the sound of gulls, and my fathers breathing. I would try to match my breaths to my fathers as we sat in silence. I was a miniature version of him, looking into the dark waters thinking our thoughts. I wonder now what he was thinking. I wanted to be him. He was perfection. It was the perfect harmony of a father and son. It’s a precious jewel of a memory.

In my painting are remembrances of the rocky cliffs and the calm waters of these pristine California coves. I wonder if they are still there as they were way back then? (Circa 1958) I wonder. 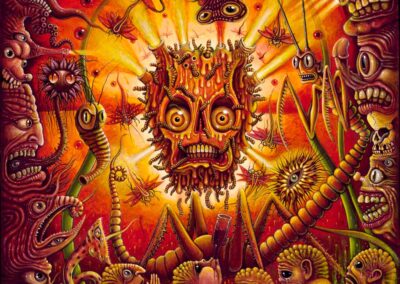 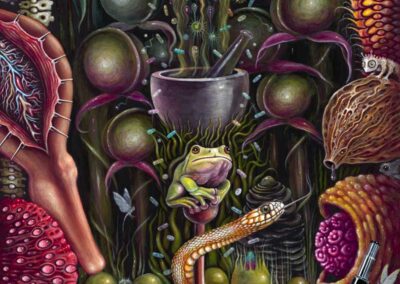 PHARMAGARDEN ~ 2011
sold
Original was commissioned by a private collector 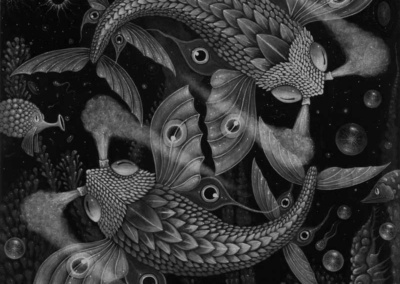 click here to go to the next gallery page